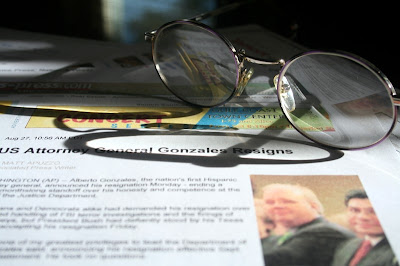 Shame. Thy name is Alberto Gonzales.

I felt a personal relief and an overall lessening of fascist gloom when Rumsfeld, Wolfowitz, and Rove resigned from Bush & Co. Even though I realize that Gonzales is a mindless drone, his resignation is different. When I read or hear his name, I see the word, "torture," and feel sick. His mindless droning (e.g., political bias, disregard for international law, disdain of Congress, and heartless cruelty in advocating torture) has carved up justice and fed it to the war dogs. 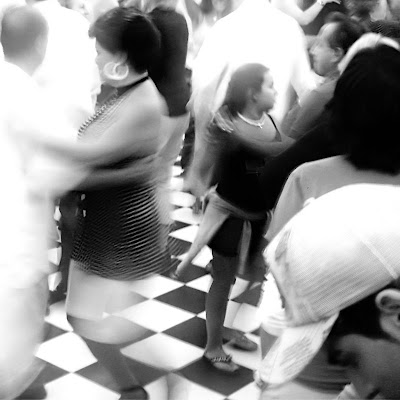 "There is increasing concern amongst a wide range of commentators that human nature is in the process of being irrevocably changed by technological advances which either have been achieved or are in the pipeline." - Ray Tallis

My maternal grandmother, Eleanor, was a remarkable woman. She died when I was a child and I saw her from the perspective of the very young. My early memories and impressions of her were of a big woman in dark clothes who lived in Buffalo, New York, and brought a whiff of urban grunge to our pristine, suburban, Arizona household.

Everything about her was strong. Her face was dominated by a proud, Roman nose and intelligent eyes. She was stout. I never saw her wear a garment with frills. Her shoes were tough, designed to last for decades. She survived world wars, a depression or two, and maintained her independence until the day she died. She shared my bedroom on her annual visits and we would talk a bit about life. I discovered that I knew very little about struggle and deprivation and Gram was an expert.

"What's the most important thing in the world, Gram?" I chirped one morning.

"Health," and Gram further explained the importance of every aspect of health, including the absolute necessity of regular bowel movements. She was an advocate of Gaylord Hauser's "natural way of eating" and introduced our family to herbal remedies and enemas.

Gram also explored religions and did not "believe" in any one system or teaching. She formed a spiritual philosophy based on what made sense to her from all religions. I didn't realize it at the time, but she was a very progressive social thinker and a political libertarian, suspicious of government at every level.

"Will my friend go to purgatory because she's Mormon, Gram?" I was really bothered that my best friend would not go to heaven because she was not a baptized member of the "true" faith.

"Purgatory, humph, now that's one of the silliest human inventions, ever. The only invention that is sillier than that is hell and your friend won't be going to either one, Kathy."

"That's not what the church says, Gram." I was now worried about Gram's soul and thought maybe my mother would be a better person to ask about this worrisome problem. I listened to Gram's religious philosophies for a while until I managed to escape and search out a better source of religious information. It took a while before I realized that mom and dad agreed with Gram's explanation of purgatory and hell and over time, I realized that religion is a human interpretation of the way to god, not god itself. This concept was further reinforced when the Catholic church reversed itself on the sinfulness of eating meat on Friday. When a belief as embedded as meatless Fridays is changed, anything can and will change. In my heart of hearts, I applauded this change and always maintained a mild excitement about change, mixing things up, progression.

"Gram, would you like to go to the moon in a spaceship?" asked one of my little brothers as we watched the launch of a Gemini rocket during one of her visits.

"I can't keep up with stuff like this, kids," and she didn't say much more while we all cheered another rocket ship lift off.

Later, she explained how each technological advance in her lifetime seemed so strange initially. She used the telephone as an example of a technological marvel in her childhood that progressed from a luxury item of convenience to a daily necessity. The newness of the phone, the car, the airplane, had gradually become a blur or background for their usefulness in the present day. She became really excited about antibiotics. I didn't know that medicine and the delivery of medicine was a new technology or science until Gram talked about her early years before an established health care system. In those days, thousands of people died of simple infections, pneumonia, flu, and even childbirth.

It was clear to me that although Gram was sometimes overwhelmed and mystified with "science," she was not afraid that these inventions would negatively impact the human condition. She had experienced the "promise" or hype of technology and lived to see the hype evolve into human solutions for human problems. I believe she welcomed innovation because she had see it harnessed by human need and made ordinary.

My family was open minded and no one feared science or innovation. Like my grandmother, I recognize the awesome potential of technology, but I do not fear it. It has been my experience, that science advances and improves the human condition. We are a healthier, better informed, more secure and peaceful world, thanks in part to technology and science.

The destruction of humans and/or the world will not come about because of a scientific breakthrough. The human body and that which is rooted in the material world is frail and short lived. The intellect, fueled by the spirit, finds ways to transcend this limited and pain-filled human condition. I can only conclude that anyone who chooses to impede or disparage this process of transformation cannot accept the basic principles of change.
Posted by Kathy at 8/25/2007 08:55:00 AM