Am I a Bad Person

A person I love and respect despises poor people. She volunteered for several years as a driver for an urban food bank. She not only drove food from collection sites to the distribution sites, she successfully solicited donations from grocers and farmers and other manufacturers of daily living products. She was out to destroy hunger in her community and definitely made a dent, but the problem itself persists. The battle for survival for the persistent poor is endlessly dirty, petty, mean, and hard. Hard living makes hard people who are willing to push to the front of the line, never say thank you, and scheme to rip you off. This was her experience and she shares a similar viewpoint with others who live and work among the poor.

Chris Hedges opens his book "Losing Moses on the Freeway: The 10 Commandments in America" with a sad and exhausted commentary about his two years as a minister in Boston's Roxbury ghetto. 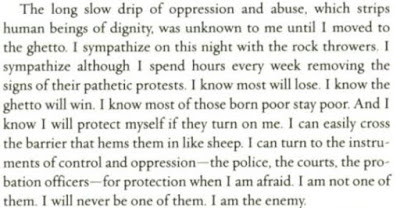 When my friend and I talked about poverty, we both recalled times when we had no money, or were stranded, or desperate. I remember missing meals, hoarding pennies from the gutter, fearing violence, These memories stand out because they are not common to us. They are brief nightmares in an otherwise good life, a life of opportunity, a life of choices, a life peopled with resources and benevolence. The polar opposite of lives described in the movie "Precious" or in Hedges "Losing Moses on the Freeway."  The poverty in these chronicles is generational.

After the stock market crash and the world wide depression of 2007-2008, many Americans were forced further down the economic ladder. The "middle class" was hollowed out by debt, unemployment, health hazards, and hopelessness. The poor continue to be hammered with loss. The lessons of the Great Depression were ignored by libertarian and tea party rage. So, at a time when America needed the help of the government to feed their families and find work, "blame the poor" social darwinists were elected and began a systematic roll back of desperately needed jobs and assistance programs. America got meaner.

Despite the continual beat-down and denigration of struggling low income workers and families, the economy is recovering. The cost is loss of confidence in government and American unity. Voters watch as elections are won by Supreme Court rulings or Russian hacking, and endure the whining of the republican/tea party winners that people don't love them enough or are too stupid to understand that slashing food stamps, meals on wheels, school lunch, after school programs and more are good for us. Why? Because these cruel legislators cannot "find" proof that they are worth the cost and the money is needed to build walls or wage more war or reconstruct other countries.

Now... wait a minute. There is proof that these programs are worth taxpayer dollars. These programs benefit taxpayers, all of us with elderly parents, unemployed sisters and brothers, children! They are concrete proof that America has confidence in its citizens. These programs recognize that people can do better with compassionate assistance. These programs give hope to millions. They are practical solutions to problems identified by citizens over the years. But, in 2017, facts and the will of the people are not enough anymore.

The Trump administration is busy discrediting the media, government research orgs, human services government agencies, the judiciary, and even itself, to support its lies and misdirections. Proof, truth, providing facts and information to the masses has become a tedious waste of time for our beloved leader and his minions. Their actions and rhetoric demonstrate that they despise the poor, not because they've talked with or even met people like "Precious" or the ghetto dwellers in Hedges book. They hate them because of their potential.

In their golden utopia fever dream, the poors are a drain. They are kill joys with their protests and riots. They are unsolvable problems. But, the real kicker is that they can vote. A poor man's vote is as valuable as a billionaire's vote. If every Precious voted for the other guys, there goes the utopia for the golden people. Fear of a black or blackened planet is real. The lower orders have the potential to make America gritty, ugly with their sweat, crude, unrefined, and unpredictable. Some of them might strike it rich and then there goes the enclave.

This level playing field must seem unfair to the oligarchy. Trump's proposal to form a cyber security unit with Russia, while his 2016 election campaign is under investigation for colluding with Russia to win the presidency is a billionaire war cry. The billionaire's club aka the RNC is currently in hot water for data mining and exposing 198 million voter records on "the cloud" supposedly for the purpose of advertising placement, the traditional channel used to favor candidates. One person-one vote may be the law of the land, but good data on how, when and where that one person votes is what can un-level the playing field. We're only steps away from blatant gerrymandering, literacy tests, poll taxes, and elaborate registration systems designed to discourage people from voting. While these barriers are heinous, the real crime is that the RNC's privacy breach may make American's fear their vote. We fear that our information will be cherry picked by con men and thugs (again!).

The golden people hate the thought of upward mobility. Downward mobility is the natural trajectory of the undeserving poor. The cult of selfishness which is the hallmark of the republican congress dismisses "the common good" as unreasonable and an obstruction to their goal of making sure each worthy individual has the potential to make money. The golden people revere the money makers and make the way straight for them, tossing the money-less to the curb to live brutal and short lives. That's their solution to the poverty problem. Make it worse not only for the low income and poor, but for anyone who gets in the way of the moneymakers. There are Americans at all socio economic levels who resist the current republican/tea party breaking of a compassionate nation. They work to reduce or eliminate the shameful fact that approximately 15% of our population lives and dies below the poverty line.  They are sharing their time, money, goods to create a healthier more peaceful nation. They recognize that poverty is the cause of crime and revolution. They also recognize that some things never change and a stable program to assist those in need is not a luxury but a necessity for our protection and security.

"Am I a bad person for how I feel about the panhandlers and junkies I used to try to help at the food bank?" asked my friend.

There is no question that she is not a bad person. She is an angel here on earth in more ways than I can count. She took action and provided help for her community. Bonding with the food bank clients was not part of the deal. For some reason, we often feel guilty or confused about expressing our true feelings and preferences, especially if they are negative. Writer and psychotherapist, Lori Gottlieb, offers some really good insights about feeling the feelings:

"You can have compassion without forgiving. There are many ways to move on without forgiving, but pretending to feel a certain way is not one of them. Forced forgiveness is false forgiveness for somebody else’s benefit. As therapists, the last thing we want to do is to talk people out of how they really feel." Lori Gottlieb from the article "I'm Not Sad My Grandmother's Going To Die"

Am I a bad person for despising the billionaires who are destroying American stability with their blatant cronyism and destructive war on the poor? Like Gottlieb explains, I don't have to forgive them for giving our nation to Russia or the highest bidder. Maybe compassion and open communication will go a long way toward understanding and reconciliation. I continue to hope that the 38% who support Trump, despite every reason not to, will wake up before we all have to learn Russian and Chinese to get along in the world. They need to stop believing the worst about Americans and start facing the reality that they have given our country to con men and deluded ideologues. The rest of us will never forgive them, but we will compassionately feel their pain along with our own.
Posted by Kathy at 7/09/2017 10:41:00 PM