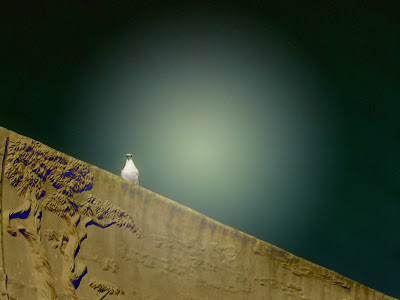 I watched the sky darken at noon.
Wild winds shook the windows.
Sirens echoed across the city and
people scurried from buildings
scanning the horizon for funnels.
I waited and watched the sky
from the loading dock of the store
worried about relentless disaster.
“Don’t go outside” said Mr. Bailey
“Why did we send everybody out?”
I felt anxious for our customers.
“Store policy,” and he lit a cigarette.
We stood watching the tornado
hover at the edge of the city,
a looming funnel of destruction
menacing us with furious power.
It whirled across splintering rooftops
then back into the black lightning
of the fast moving thunder storm
leaving behind an immense silence
lifted briefly by the chirping of a bird.
We began to chatter in shaky voices.
Quiet gave way to the grind of
car engines, fire trucks, human noise.
I marveled at the bravery of that bird
singing its song in the dark silence,
just living its life until its over
and not before then.
Posted by Kathy at 10/09/2019 02:12:00 PM