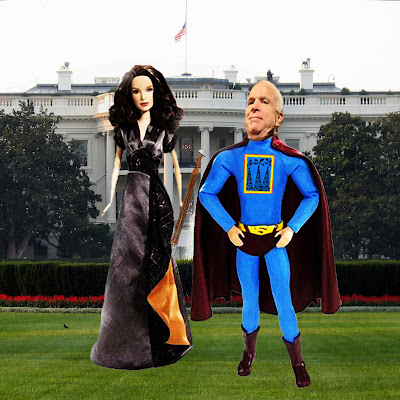 Superman: "I'm here to fight for truth, and justice, and the American way."
Lois Lane: [Laughs] "You're gonna end up fighting every elected official in this country!"
- Superman (1978)

Yesterday, an election bomb was dropped and it stole Obama's mile-high glow. The oldest candidate to ever run for president, John McCain, announced his choice for running mate and E-V-E-R-Y one wants to know... "Who's Sarah Palin?"

I know women like Palin, feisty, intelligent, principled, family oriented people who have overcome difficulties and succeeded beyond our wildest dreams. I admire people who take on their city council's latest idiocy, who oppose the majority on the school board, who will not vote to convict on a jury because guilt has not been proven beyond their own shadow of a doubt. Such people often prove to be the rare friend to hold your feet to the fire when times are tough and you need a swift kick.

They are not restful, comforting, team building, facilitating individuals - it's their way or the highway and Sarah Palin's firing of staff and government officials who don't toe her political line is just such an example. Mavericks, wild cards, loners, ideologues, trailblazers have their place in our lives and our government, but McCain's VP choice shows not only a desperate need to shake up his campaign and distract the voters from issues, his choice also shows me that he wants that Superhero sidekick of his dreams.

With Palin by his side, they can save the world from the chaos of abortion rights, civil rights, privacy rights, liberal rights...the wrong kind of rights, I guess. She's the perfect sidekick for a comic book world beater, beautiful, athletic, gentle with her kids and a barracuda with her enemies - a kick ass girl who fights for ethical government while using her office to take down her sister's Ex.
She's ready to take on the evil Washington establishment, erm.... well, maybe not all of it since she's a Bush supporter - the most inside of Washington insiders.

According to those that "know", however, she's good for repugnatans because her ultra conservative/anti abortion/ anti environment/ gun loving platform is energizing the religious far right. All McCain and Palin need now is an endorsement by Pat Robertson to really prod the beast.

How can McCain expect us to believe he wants to protect the environment, reduce oil dependence...yadda, yadda, when he chooses a running mate who continues to oppose these views? It's worse than the Bush Oil Cartel.

(9/1/08 pm Postscript: Apparently, Palin is carrying more hot water for the repugnatans - her poor seventeen year old unwed daughter is pregnant. Naturally, the "left wing, liberal bloggernaught" is being blamed by these clueless people for digging up "private" and painful issues about the Palin family. Playing the "blame the liberals" card isn't quite as easy as someone thought it would be, however. Alaska republicans that have tangled with her spread the story first, and naturally bloggers on both sides sniffed it out.

Question: How concerned and caring is Palin, really? She has knowingly subjected her own unwed, pregnant daughter to the merciless glare of public scrutiny rather than suck it up and turn down her path to glory and spare her family what is turning out to be hell. It is just, plain stupid to think that people won't care about her problems and even more bubble headed to think political opponents (both Democrat and Republican) won't use any scandal or misstep against her. 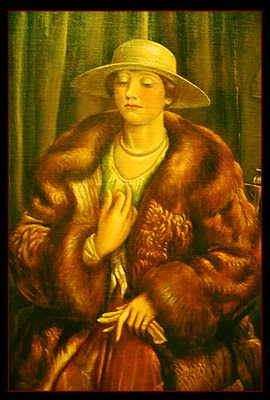 “Illusions commend themselves to us because they save us pain and allow us to enjoy pleasure instead. We must therefore accept it without complaint when they sometimes collide with a bit of reality against which they are dashed to pieces.”
Sigmund Freud

"Aren't you interested in getting married again and having more kids," Bill asked?

"No. I've thought about it a lot and I'm only having as many kids as I can support by myself. As far as I can tell, I'm set with my one son," I replied thinking what a boring blabber mouth I am. He didn't want the truth and I shrugged when he cracked an arid smile.

I was in Bill's office discussing ways to collect back child support from my ex. It had been over a year since he gave me his one and only $100 child support payment. He was making money now, touring with a chart topping singer and I felt pretty confident that I could get the courts involved in garnishing his wages, or something.

"When so much time goes by, it looks like you don't need the funds and the courts figure if you're not going to make the effort, neither will they. Can you support your son without his $100 check?" Bill asked.

I remembered the gossip about Bill's really nasty and recent divorce from his stunning, socialite wife, and realized that Bill was not about to stick it to one of the guys. I was glad that I had blabbed my - every woman for herself - procreation philosophy to him. I thanked him for his valuable time and advice, he was a VP in the company I worked for and an okay guy, and then I went for a long smoke break on the roof top of my office building.

I really hated the idea of this reckless man, my ex husband. The concept of someone who is so casual about his child, so ignorant and so bereft of accountability hurt my heart. How could I have fallen in "love" and stupidly gotten pregnant with this alien being. By this time, though, I didn't even have the psychic energy to question his outrageous behavior. It was time to move on and live as if his addictions, neglect, stupidity and weakness were somewhere in the cellar with the unwanted collectibles - too costly to throw out, but not valuable enough to maintain. I began to think of him as a distant and unlovable cousin, someone who would always be in our lives but not in any meaningful way.

I've always resented Bill's harsh words, but even then, I valued their truth. He threw the cold water of reality on my illusions of marriage and fairness. From that time of my life until now, I cannot take love relationships and fair dealings for granted. Love and fairness in everyday life is a gift, not a right.

Much of what has brought me comfort over the years, love, security, trust, loyalty, friendship, family, feels shaky. This lack of confidence in these "god qualities" goes back to my first real conflict with the concept of god. I don't even remember this childhood conversation, but the final result was a recognition that belief is choice. I chose to believe in god. It made me feel happy and a life without god made me feel afraid. It's that simple.

The god qualities people are supposed to express (see list above and add your own stuff) are real. Whenever I run into a person who truly expresses one or more of these qualities, it feels like a miracle. I am blessed and grateful to have a lot of people in my life who choose to explore the god quality realm, and I am glad to explore with them. But....

...there is the dark side. Pain. It hurts so bad when your husband cheats on you. It hurts so bad when your illusion of security is lost, and you have to eat one meal a day instead of three. It really hurts to see the two or three people in your life that you really love suffer and die. People go crazy sometimes trying to endure the daily grind, or smile through their tears, or maintain the facade of competence. There are so many reasons for people to veer off of the god-quality path and into oncoming traffic.

John Edwards, you shit, I am sorry that you lost your grip on reality. You can now accept that you've shattered any illusions the American public may have had about you and you can find something else to do with your life. My hopeful fantasies about you were shattered when you decided to run for president in the first place, even when you knew your wife has terminal cancer.

"Why on earth would he want to run for president instead of be with his wife and family during this terrible time?" I remember asking that question, and like those trippy, toy 8-Balls, the answer rose to the surface.

"He is consumed by ambition. He cannot be trusted."

I wrote him off a long time ago. Now, his wife is another story entirely.

She knows Edwards is not worth the lint in her belly button and now the cat's out of the bag and I wonder how much ambition or illusory "love" she's been hauling around all of these years. I suspect she just wanted to hang on for another few years and end her life with dignity. Bless her. It's not for me to judge or speculate why someone would choose an illusion rather than face reality. 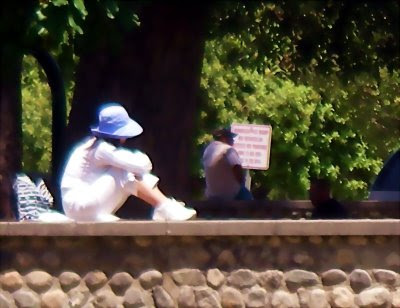