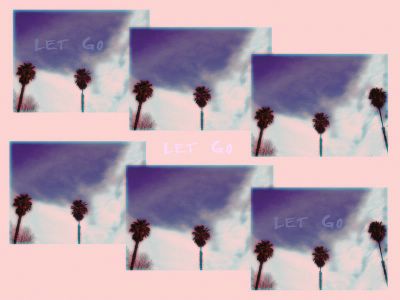 We rented the "Garden States" DVD last night. I love this movie.


The End of an Era

"Most smart people tend to feel queasy when the conversation turns to things like "certain death" and "total failure" and the idea of a "doomed generation." But not me. I am comfortable with these themes. There is nothing new about them, except when they come all at once. Any conversation that can make smart people confront a mix of Death, Doom and Failure with a straight face is probably worth listening in on. They don't come around real often, and when they do it almost always means that at least two of the people doing the talking are in very serious trouble......"
-Hunter S. Thompson (page 299, "Generation of Swine")

That is my initial reaction to Thompson's suicide today. I'm sure I'll acquire a more philosophical reaction over time, but right now I feel disappointed, abandoned and very, very sad that this raging soul left without saying goodbye.
Today's Update ---- Apparently, HST was on the phone with his wife when he blew his brains out!
Posted by Kathy at 2/20/2005 11:25:00 PM 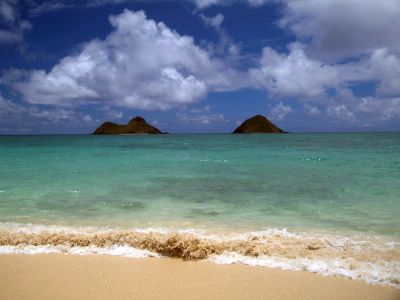 
My brother took the beautiful picture posted today on his last visit to Hawaii. It is one of the few places I've ever visited that looks like the posters that promote it. The water is so clear you can see the fish, sea plants and sandy bottom. Everybody loves Hawaii!

I found a couple of articles that have clarified things I've been thinking about lately.

For some reason autism has always been a fascination for me. The movie, "Rain man" is an all time favorite and I just re-read a haunting book titled, "Nobody Nowhere" an autobiography by Donna Williams who is autistic. Many people consider her book one of the few coherent records of an autistic life. The BBC article about about Daniel Tammet reveals more of this world from the standpoint of an autistic savant.who says and does amazing things.

Another champion of clarity is Canadian Prime Minister, Paul Martin, who breaks down the concept of "same sex" civil marriages to its most basic components.

"This question does not demand rhetoric. It demands clarity. There are only two legitimate answers – yes or no. Not the demagoguery we have heard, not the dodging, the flawed reasoning, the false options. Just yes or no. "

I just got a little clarity about the creation of "The Family Guy", not as important an issue as autism or same-sex marriages, but burning none the less.

"O(nionAV Club): You came up with Family Guy's voices before the character designs, right?

SM (Seth MacFarlane): Yeah. For the most part, at least for the characters that I voice on the show, that's usually how it works. I find it easier to come up with the personality first, figure out who the character is, then do the drawing after the fact. Stewie's head, for example, is shaped the way it is for no particular reason other than that was how the voice sounded like it should look. It's usually the voice and the personality that comes first. "


A Government of Logical Fallacies


"..,The 2006 Budget funds efforts to defend the homeland, transform our military for the 21st Century, support our troops as they fight the War on Terror, spread freedom throughout the world, promote high standards in our schools, and continue the pro-growth economic policies that have helped to produce millions of new jobs."
-Excerpt from White House "In Focus" 2006 Budget Fact Sheet


While blogger pundits are whipping up non-existent drama over the politically incorrect words of former CNN news chief, Eason Jordan, the White House is easing the truly alarming and dramatic 2006 anti-budget through Congress.

The press statement above and others like it promote an "ownership society" guided by patriotic, faith-based conservatives toward a world of freedom. Supposedly the trickle down effect of this goal is homeland security for which our young are required to sacrifice their lives. I suppose these same men thought to interject some domestic good news and threw in the economic expansion and jobs goals - always a good thing.

The President's budget (link) shows increases to defense and homeland security which will beef up the military but there are many who question whether the ultimate goal of this mammoth spend fest - to defeat terror, btw - is doable. Most of the budget cuts are in the domestic programs area, so the "afterthought" domestic prosperity goals are probably all talk and no substance. Could be why Bush keeps repeating this ersatz goal "ad nauseam", expecting that no one will debate whether it can be achieved.

For those of us who are spread-sheet challenged, the text explaining the increases and cuts is very helpful and the bottom line is...:

The Bush Administration has its priorities. Domestic, environmental and labor programs are not high on the list. The Department of Commerce really deserves a close look as does the Dept of State, etc. I did wander down to the numbers and noticed that a lot of the things ordinary citizens take for granted will now have "user fees" attached. Nice. Another outcome of the permanent tax decreases and federal budget cuts is that our local and State governments will be increasing taxes and levying their own user fees. Double Nice.

One thing I've learned to expect from the Bushites is that they are proud of self-service. This budget is a painful (to me not them) example of it. The pundit hysteria about Jordan's politically incorrect comments is the latest "red herring" which conveniently diverts from critical debate on the war and all other real issues, including the budget.

If you like to pull wings off of flies, there is nothing more entertaining than to watch a party loyalist slipping misinformation to Dan Rather, for example, and then laugh at the sharks as they debate typewriters instead of gaps in military service. The "trophy hunting" pundit lives for the sensational fun to destroy stuff. Why give ol Rather the benefit of the doubt when they can assassinate his character and move the debate toward the tried and true logical fallacy - the personal attack. Let's kill the messenger and let the steaming pile of message itself just sit there for the general public to step into.

While the general public is busy scraping this muck off of their shoes, the administration's need for secrecy is self served. The well-trained and apparently well paid media circus animals jump through the administration's hoops and help keep the untrained reporters busy dodging bullets or fending off attacks on their character.

The mainstream media and blogger pundits who follow these "red herrings" obscure real public debate so necessary to the public trust. I hope they realize that empty words will be the only reward their readers will get. Just look at how those loyal red-staters in the heartland are being rewarded for re-electing Bush. They get a ten percent decrease in the Department of Agriculture.
Posted by Kathy at 2/15/2005 06:12:00 PM 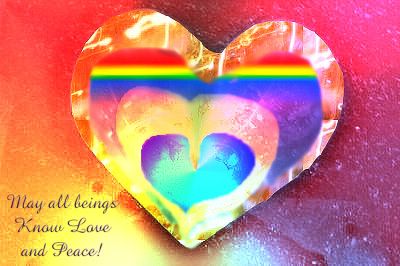 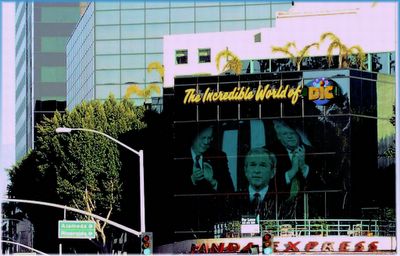 Citizens familiar with beautiful, downtown Burbank, California, pass this building regularly. The granddaddy of pop music, Dick Clark, has several DIC buildings scattered around the city each with it's own distinctive DIC label on it. This one is my favorite and with a little photoshop enhancement, it takes on a certain dark glamour. Hmmm.

While listening to the President's State of the Union address, the word "incredible" came to me over and over. After a brief meditation on incredibleness, I saw the DIC building, and reflected on the incredible world order of BushCheney. It was a sober reflection which then coalesced into a nightmare landscape filled with missionary dics banning and imprisoning pop culture icons, Sponge Bob, Buster Baxter, and Michael Moore. I can't image wholesome and wealthy Dick Clark ever triggering the ire of these cultural watchdogs, but who can guess what sets them off. It seems fitting to put their fantastic likenesses on this DIC building and contemplate their world.

This incredible world does not have a place for liberal dinosaurs like me. Indeed, I wonder if it has a place for those endearing radicals, the founding fathers of America. They were so sick of their very own King George and his insanity, they decided to revolt and succeeded. They fashioned the First Amendment to protect future protestors, speechmakers, cartoon makers and newspaper owners from political and religious coercion. According to recent studies of the youth of America, our future leaders think the First Amendment and civil rights are old-fashioned. They dismiss "self evident truths" because they were created when the world was less dangerous, apparently. Ummm, not! The 1600 and 1700s and most of the 1000s were filled with atrocities, wars, religious bigotry, war, rape, plunder, plague, pillage, and did I say war?

I'd trust our Founding Fathers to know what works for liberty and against repression, subjugation and tyranny more than I'd trust GWB and his passel of mathematically-challenged advisors (e.g., link to the accurate math on Social Security) and his unreal-world blowhards (e.g., link to Rumsfeld's latest). Wake up kids! Who benefits from pre emptive wars of liberty? Not you!

Why can't the youth of America feel a draft? Scanning the news tells us that the National Guard is in chaos while it tries to fill a large military chasm of prolonged world policing for which it is ill equipped. Today, the US Marine Corps announced that it did not meet it's recruiting quota for the first time in ten years and admits that waging two wars in two, god-forsaken places has taken the glamour away from being an American warrior. The armed services are offering re-enlistment bonuses of $30,000 to keep some of the ranks filled, and the report that "maybe" troop levels will be reduced in March is greeted with, "Yeah, sures," all across America. Meanwhile, our new Secretary of State is rattling the sabres on her visit to Europe and barely backed off of her rant against Iran with a quip that only a confirmed bureaucrat could love, "It's not on the agenda." Isn't that a comfort though? War with Iran is not on Condi's agenda.

What is on the agenda for the Bush administration is a deliberate knife to the safety net underneath America's high-wire war act. They will continue to bury anyone who doesn't toe the GWB Republican party line like Rep. Joel Hefley (R-Colo.) and bring in the Fallwellian godmeisters to pray them into career limbo for the next four years. They will not tolerate the godless corruption of the minds of our children with an asexual cartoon "Bob" but will tolerate the corruption of our Congress by a heterosexual Tom. Incredible.

Waxy.org offers this method of figuring out the trajectory of American liberty with a link to The State of the Union Parsing Tool. Keep clicking "choose words for me" until you get to God. Interesting that God was never mentioned in George Washington's State of the Union Address and that his speech was the shortest.