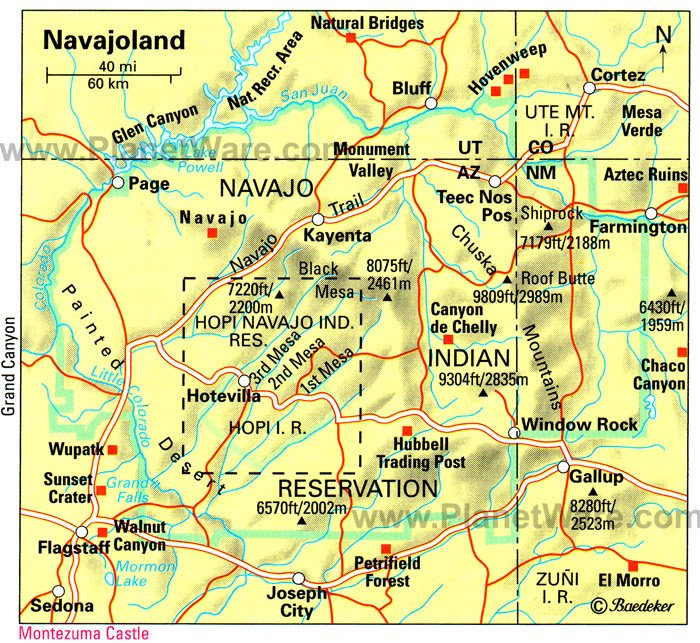 We bought rain ponchos at Target on our way out of Flagstaff.  The monsoons had just started and we were travelling north, into Colorado by way of the Four Corners.  We had snacks, water, music, stories and information about the 340 miles of territory along the Navajo Trail into Durango, Colorado.

We passed between Humphreys Peak and Sunset Crater, the two towers before the flat lands along the Little Colorado River.   For some reason, snippets of songs and comedy routines floated in and out of our nervous conversations.  There was talk of work, politics, cars, health, family until we stopped at Tuba City for a bathroom break, and wandered a bit, stretching muscles and taking off jackets, rearranging belongings and shifting our sore spirits into vacation mode.  Fifteen minutes later we were settled and rode out lighter and better prepared for an adventure.

The land opened up into endless mesas below huge, white clouds.  Endless, fresh, timeless and uncluttered terrain through every window, so beautiful we'd all spontaneously exclaim,  "Pull over so we can take pictures!"  Our patient driver had been on the trail before and knew when to pull over and allow us to see extraordinary sights while absorbing the peace and beauty of the reservation.

Some people do not like the desert.  They feel insecure and insignificant under the big sky and dry, sculpted land.  I like that feeling.  I breathe easier when there are few cars, no buildings, no people, no wires.  I like the bone melting heat and the clean air.  I like the surprise of sheep and/or horses wandering across the road. A distant farm with crops, fruit trees, a windmill and water tank presents a strip of vivid green in an otherwise red-brown landscape and I wonder what it would be like to be that farmer.  Out of nowhere, sprouts a roadside diner, or an abandoned motel, or a small concession stand where Navajo jewelry is sold by grandmothers.  All of these human enterprises seem dwarfed by the mesas, gullies, diatremes, mountains and sky. Even the road seems small compared to the pathways through gigantic rocks carved by wind and water. For a city person, the vastness of sparsely populated reservation lands is a bit intimidating.  When I am in the middle of a vacant roadway, surrounded by cloud filled sky and red mesas, I feel like I have nothing to hold on to but air.  It's a scary feeling at first, but after a while I feel free.

"The sycamore tree symbolizes protection, divinity, eternity, and strength. It appears in the Egyptian "Book of the Dead," and the Bible." - EHow

Summertime in the high desert is the prime time to love your trees.  The shade is so precious and welcome.  By stepping out of the direct sunlight into the shade, the temperature can go down noticeably and give you the chance to catch a breath and move on.  Without the shade of trees, walking anywhere in 100 degree heat is a test of endurance and stamina. 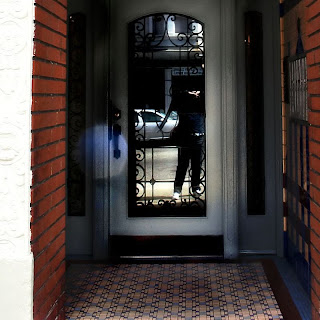 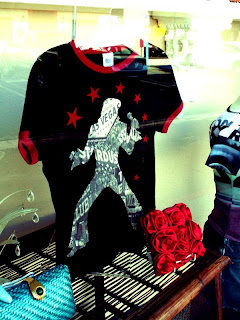 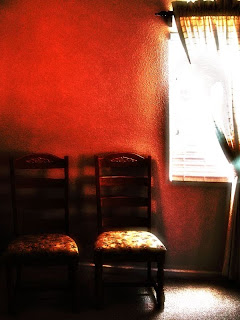 “The chef wants to know if the food is good,” said the waiter.

I looked down at my plate full of fish. “Oh. Yes, very good, thanks.”

“Well, he wants to know why you aren't eating the snapper. He notices and feels bad if people don't eat his food.”

It's Saturday afternoon, no one else is in the restaurant, except us. I now realize that the manager made a special effort to give us the evening's special and here I am ignoring his staff. Instead of acknowledging their extraordinary efforts, I am giving all my attention to this stranger I've married, a man who mumbles lies about love, distance, the future.

“Please, may I thank him for this meal. I'm so sorry to cause extra work for you all,” I said. “I'm just not very hungry but his food is delicious.” The waiter nodded, cleared our plates and walked briskly to the kitchen.

“Come on. Let's hurry up and finish,” said Jude. His eyes wandered around the room and settled on my mouth. “I need to get my things together and the shuttle leaves in a couple of hours. We need to say good bye, right?”

A wan smile creased his pale face while he ran an elegant finger down my cheek. We drank our wine quickly and tried to calculate the bill and the tip.

“On the house,” said the waiter. “See, there's Chef George.” A small, dark man smiled and waved from the kitchen door, then disappeared. “Once he saw you, he didn't feel bad about finishing the food because you're so small, um, dainty, he says. Sorry for mentioning it.” Before I could ask what the waiter's name was, he was gone, too, and we were completely alone in a big dining room. I felt unhinged and numb. Maybe it's the wine. Maybe it's a feeling one gets from being isolated and alone for too long.

Jude carefully laid two ten dollar bills under the salt shaker. “I wonder if our friend will be back. Hope so. Are you okay?”

I grabbed his hand and kissed it. It was then that a light ignited behind his dark eyes, small and feverish and a welcome relief because I really didn't know how to tell him that I am pregnant. We hadn't seen each other in a while and I still reeled with the idea that somehow, despite our separate lives, we made a baby. Was it his? It had to be.

We took a brief walk outside while I smoked and he coughed. Tonight was my last show on the road for a while. The band leader, Al, and two other players lived in Buffalo and they had booked a lounge gig for six months somewhere downtown. No more traveling. No more band. I was moving on, but not sure where I was going. Jude was touring with a concert rock band based out of Chicago, had been for over a year, and their next destinations were South Africa, Australia and Japan. He would be gone for three months. I wasn't even sure if he had or we had any place to live, a critical consideration now that I would give birth within the year.

I told him I was pregnant as we lay together in my hotel room. He was in the shower now. His reaction was mild. I cried a little while he examined my breasts and felt my stomach. His touch was tender and it was sweet, much sweeter than I had imagined. In many ways, we had grown up together and I had forgotten that there was this spider web of a bond, strong and very thin, worn down over our four years of marriage. He accepted. I was working on acceptance.

“Are you afraid of the pain, Karina?” He knew I was anxious and I was afraid. He was right about the fear.

“I'm afraid of the future. Where will I live? Should I go back to Chicago, stay where you're staying? Or, should I go to Kansas City and live with relatives. Things are different now. I'm a singer and having a baby feels like I'm making a wrong turn. Going away from what I know how to do.” I was biting my cuticles and started a river of blood on my right thumb.

“Do you want to keep the baby or do you want an abortion?” He said what I'd been thinking and if he had given even a hint that the baby was a mistake, I knew I'd get an abortion, but he was mild. He was as confident as itinerant musicians can be about the future. He smiled. I sucked on my thumb until the blood stopped flowing.

“Well, it seems like now is a good time for us to have a baby,” I stammered. Swirling around the room were questions about insurance and money and where we'll live and even how we'll live. I did not feel sure about being a singer anymore and that left a gaping hole in my self image. The thought of being a mother did not seem to fit inside of that hole.

He wondered if I should go live with my parents until the baby is born and we talked about logistics for a while, finally deciding that I'd go to Chicago day after tomorrow. He'd be able to meet me at O'Hare and we'd settle into his apartment. That's as far as we got before I had to get ready for my final performance, and he had to catch a shuttle to the airport.

I slept well that night. The band went out with an emotional whimper. I knew I'd never see these musicians again. We played well and the crowd was happy. Even the hotel owner came to the first set and tried to get us to do three more weeks, but our band was over. He tried to hustle me into singing with a piano player and staying at the hotel for as long as I wanted, but I had other pressures to consider and I reminded him that I had a husband and home in Chicago.

“All whores have husbands when it's convenient,” he tossed off in the wake of my refusal. I didn't even blink and was happy to see him leave before the second set.

Al had our final paychecks ready, plus cash tips from the club owner and patrons. The cash was a very nice surprise and we toasted the end of the road with a hefty Jack Daniels. Nelson, the trumpet player, even shed some tears while playfully propositioning me for the last time. I would miss the little games we all played with each other. We were all lonely and the pranks and jokes made the road bearable. The propositioning was one-sided – male-sided - and tedious. Nelson's attempts were the exception because he was gentlemanly and charming and optimistic, not bitter and desperate. We hugged and kissed and disbursed.

“Notice more,” I admonished myself. Nelson, Skip and Mike had girl friends, groupie friends, to bring to their hotel rooms. Maybe they were going to an after hours club, or diner, or somewhere bright and filled with human noise. I tasted sadness in my room. It smelled of air freshener and suitcases. The bathroom lights exposed a blank, blushed, assemblage - no smile, no animation. The face in the mirror scared me. I felt wild and caged and relieved to be going. Relieved to shut the door, pack and get ready to check out.
Posted by Kathy at 7/05/2013 03:59:00 PM