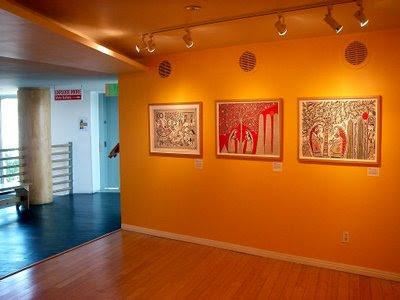 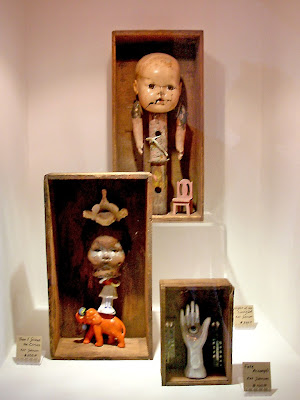 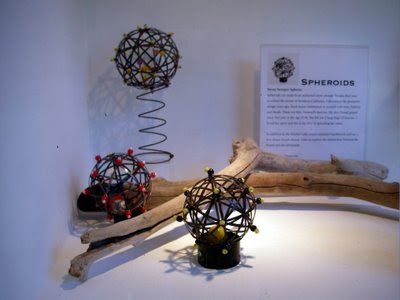 CAFAM - Quirky Stuff
There are so many art treasure troves in the city of angeles. One of my favorites is the Craft and Folk Art Museum in a small store front right across from the La Brea Tar Pits on Wilshire Boulevard.

The "Ancient Gods and Modern Politics: Mithila Paintings" exhibit is a fascinating study of ancient Indian art infused with the conflicts and dangers of the modern world. Beautiful and thought provoking artworks!

The "Celestial Ash: Assemblages from Los Angeles" exhibit was like a stroll through another world, and a strange one at that. Modern icons and symbols are captured in weathered wooden shadow boxes, unworkable gadjets are featured with elegant presentations of nature, both human and botanical all of these seemingly homey and accessible jewels are displayed with intelligence and care. At first, I thought that I could probably do something like this - throw together a bunch of old stuff and new stuff and .... then I realized each assemblage tells a story and that the art is in the concept and careful selection of the world's discards to best express the idea. Each artist's viewpoint and style was clear and powerful in their art. I could see the thought and craft in what appears to be a casual presentation. The most intriguing exhibit is the Michael C. McMillen, "Asylum of Lost Thoughts" installation. My dreams are filled with these timeless and provocative images.
Posted by Kathy at 7/24/2009 08:58:00 AM 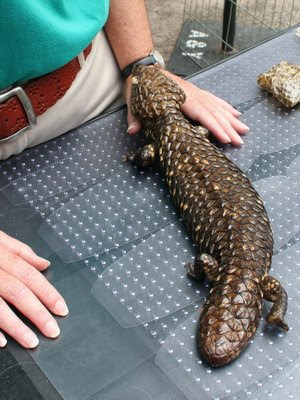 I've been trying to make sense out of today's news reports about "the house healthcare reform bill." The AP and Reuters press releases do not give the title of "the bill." None of the major newspapers give the title of the bill. The blogs blather on about a health care flow chart neglecting to mention the title or name of the legislation spawning this dissection.

Finally, about twenty minutes later, I sifted through the "health care legislation" results I googled and found an msnbc report featuring a letter to the House Ways and Means Committee from the AMA. The first sentence mentions the correct title of the legislation under consideration. It is called, H.R. 3200, the "America's Affordable Health Choices Act of 2009."

The title of this legislation is important to me because I can then access THOMAS or other government information sites and read the bill. US news organizations (press, television, radio, blogs) need to go back to communications 101: who, what, when, where and why. Americans need clarity and precision from the press about these important issues. It's not important for me to know that democrats or republicans have flow charts or like/don't like the bill. I need to know what is in the bill. Report that in the first paragraph. Make it clear what the bill contains. That's news. The political and partisan posturing should be reserved for the last paragraph, or the OpEd pages.

No one has time for reports on important news that presume people already know about the issue. Who can make heads or tails out of a report like this one...

"WASHINGTON, July 17 (Reuters) - A second U.S. House panel approved on Friday legislation to overhaul the $2.5 billion healthcare industry, but lawmakers were still struggling to find out how much it will cost and how to pay for it."

Sorry, Reuters, but this is useless garbage. One good thing this garbled mess did was make me so mad, I did my own research on "Friday legislation" and came up with something coherent and interesting....

"OpenCongress Summary: This is the House Democrats' big health care reform bill. Broadly, it seeks to expand health care coverage to the approximately 40 million Americans who are currently uninsured by lowering the cost of health care and making the system more efficient. To that end it includes a new government-run insurance plan to compete with the private companies, a requirement that all Americans have health insurance, a prohibition on denying coverage because of pre-existing conditions and, to pay for it all, a surtax on households with an income above $350,000. A more complete summary of the bill can be read here."

This summary is short, accurate and respectful of the reader. Mainstream media needs to be mindful that citizens need news not propaganda and we can smell the difference.
Posted by Kathy at 7/17/2009 09:55:00 AM 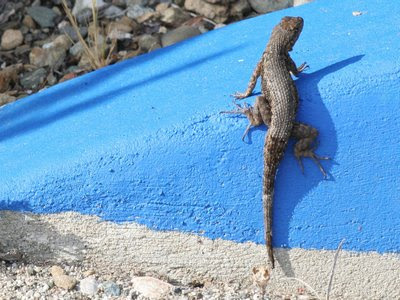 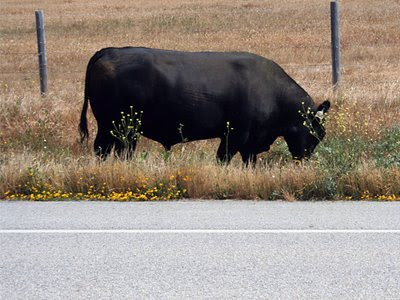 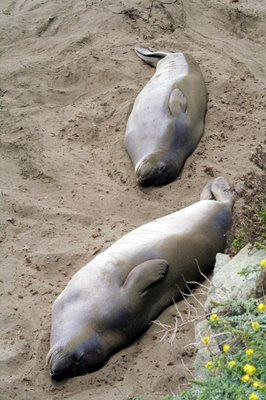 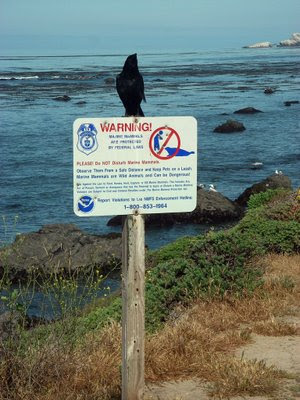 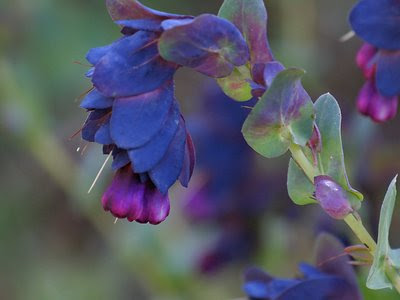 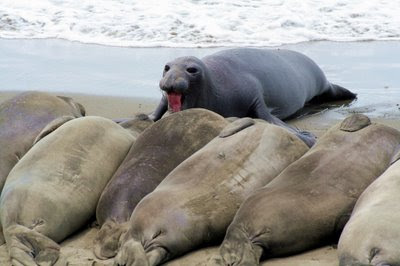 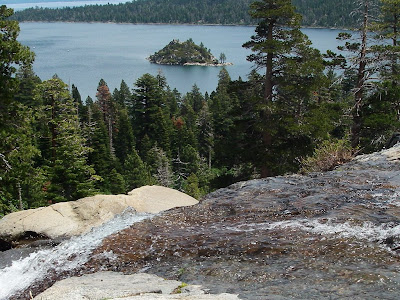 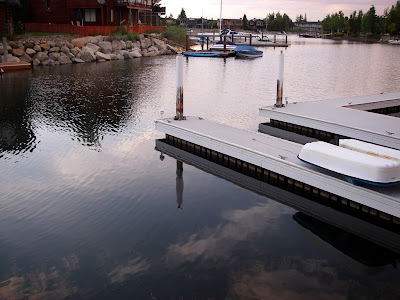 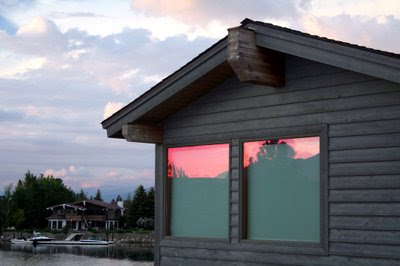 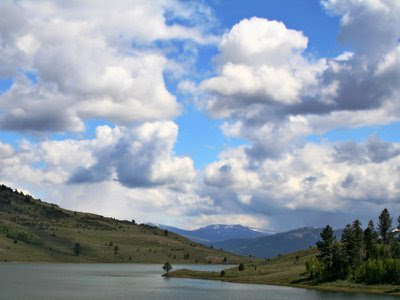 I've been to Lake Tahoe many times, and this year was the first time we drove over Monitor Pass. It connects with Highway 395 south (toward Bridgeport, Mammoth Lakes, Lone Pine - the backside of Yosemite and Sequoia national forests) and crosses the spine of the Sierra Nevada mountain range.

I never get tired of highway 395. Even though the single lane roads suck sometimes, seeing green meadows right below massive mountain peaks, some of which are over 13,000 feet (e.g., Tom Mountain ), make my heart sing. There is nothing like seeing the awe inspiring Mount Whitney, though. At over 14,500 feet, this gigantic mountain takes my breath away.

Lake Tahoe is fantastic and the drive over the Sierras onto 395 made the trip even better. I was a little worried about my semi-new Honda Civic Hybrid making the climb. It hugged the almost deserted road and had no problems at all. Take this ride if you love mountains and want to escape from the beaten path. You'll love it. 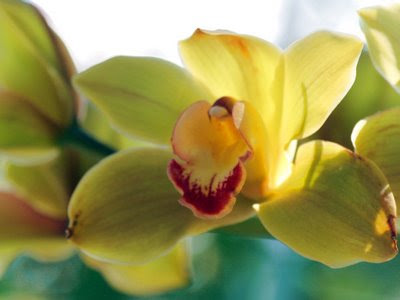 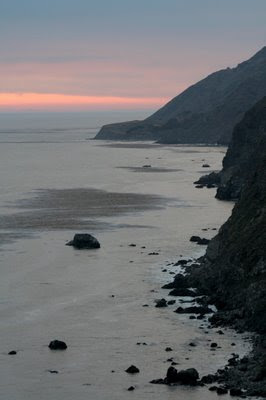 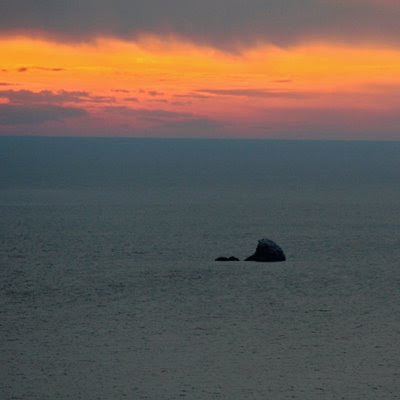 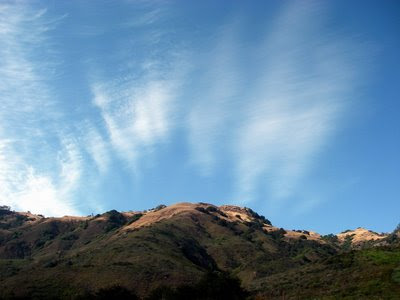 It's hard to believe that I travelled to San Luis Obispo, Cambria, Ragged Point, Sacramento and Lake Tahoe less than a month ago. California's coastline is magnificent. The variety of wildlife, especially birds, is awesome. Nature is abundant, fascinating and refreshing.
“Nature will bear the closest inspection. She invites us to lay our eye level with her smallest leaf, and take an insect view of its plain.” - Henry David Thoreau
Posted by Kathy at 7/08/2009 02:07:00 PM