Jewel of the Sky 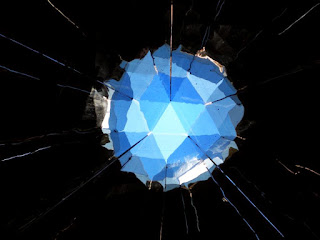 "The last transit of Venus was June 8, 2004. But don’t be fooled by that proximity in time. Transits of Venus are very rare, plus transits tend to occur in pairs. They occur in a pattern that repeats every 243 years, with pairs of transits eight years apart separated by long gaps of up to 121.5 years. Before 2004, the last pair of transits were in December 1874 and December 1882." - from article titled, "Everything You Need To Know:  Venus Transit on June 5-6" from the website, EarthSky

I almost didn't go.  My friend called me around 4:30pm yesterday and asked me to come over for dinner and view the transit.  The day was warm and clear and I didn't really feel like socializing, but I was curious.  How would we view Venus against the sun?  So... I went and was glad I did.

He has a great telescope able to track the progress of Venus.  I looked through the eye piece and saw a clear yellow ball with tiny black sunspots and in the lower left area, a larger dot, perfectly round and moving.  His family and our friends were there, curious and awestruck.  We felt that this rare celestial event was important on many scientific levels but also sensed something more in this rarity.  Maybe the transit would create a vibrational change or release gamma rays or change the weather.  We all wondered about the unknown impact of this event.


I found this article, "Meaning of the Moment', written by astrologer, Shelley Ackerman, which presents some interesting ideas about the results of the Venus Transits:

"What does this week's "occultation" (a transit where one planet gets in between the Earth and another planet) mean and where will it lead us in the years ahead?

Venus rules art, beauty, love, grace, and desire. But the planet, whose very name evokes images of valentines and Botticelli's Titian-haired goddess emerging from the sea, is much more influential than that. She is central in directing the course of our cultural evolution here on Earth."

It seems bizarre yet appropriate that 91 year old, Ray Bradbury made his transit on this special day.  He said he was not really a sci-fi writer but a writer of fantasy fiction.  He wrote about Venus in the short story "All Summer in a Day", and his fantasy depicted a sunless, rainy planet occupied by people both cruel and kind, very like people on Earth.  His vision and talent are rare gifts in the form of wonderful books, all central idea-generators in the cultural evolution of our world.

She Works Even Harder For The Money

"Hey GOP women! Your party said today that you are officially and legally worth 23% LESS than a man. How do you like working 1.2 days a week for free?"  comments by sixchair on Huffington Post article, GOP:  Women's Issues Debate Is A Distraction

It's been decades since I've heard anything so misogynistic as comments made by Eric Fehrnstrom, senior campaign adviser for Republican presidential nominee Mitt Romney.

The health, personal freedom, and paycheck equality of over half of the US population is an economic issue. To call these issues "shiny objects" designed by the Obama administration to distract featherbrained voters from the "real" issues put forth by Republicans (e.g., birther claims, Obama preferences for Muslims, voter fraud) belittles and harms women. These backward concepts show Americans just the tip of an iceberg of repression coming our way if Romney is elected.

He and his supporters will not heal or even help the economy according to world renowned economic experts. I don't need to read the latest book written by Nobel-winning economist Joseph Stiglitz to understand that the republican fixation with Reagonomics is guaranteed failure, particularly the trickle down effect of tax cuts for "job creators." The republicans have no new ideas. Instead, they believe that making the same economic mistakes will yield success. For them, success is measured by increasing the wealth for the wealthy while milking the rest of us dry. Even their basic survival instincts of lying about their contempt for the poor, disadvantaged, women, children, people of color, non-Christians, gays, .... is pre-empted by arrogance and disdain. Romney's spokesman is not speaking to the 99 percent of Americans. He is speaking to and for the one percent of the rich corporate drones.

So, who has a real voice in this democracy?  Money talks and Citizens United has guaranteed that money has the loudest voice. It is a fact that both parties benefit from wealthy contributors, but the republican party is the clear winner in this area and uses its money to relentlessly pound "battleground" voters with any message that supports its candidates.  Whether the message makes sense or tells lies is inconsequential because the "end justifies the means" as far as republican media strategists are concerned.  The goal is to convince middle class and lower income voters who have the voting numbers- still - that the rich care about them enough to throw them some jobs, cut their taxes, wage a couple of wars, and miraculously eliminate the federal deficit, too.  Simple logic says that such claims are false and republican budget proposals inadvertently tell this truth. Simple logic and experience tells me that equal pay issues should be non partisan.  But, republicans are more concerned with the "burdens" on employers than on non-discrimination and fairness.

According to the tea party-ites and republican right wingers, women are paid less than men because they leave their jobs more often to take care of their families and/or jobs are not as important to them.  These are bogus and demeaning claims.  These are the shiny objects of distraction that corporate public servants put forth.  The truth is that employers discriminate against women in the workforce and the latest democratic party effort to right this wrong has been defeated by republicans.  So women work harder and longer for their paychecks and must work harder and longer to elect public servants who represent the 99 percent of Americans.
Posted by Kathy at 6/05/2012 02:42:00 PM