She Works Hard for the Money

My friends and I were just listening to singer-songwriter,  Donna Summer, loving her powerful and expressive voice.  She was beautiful, classy and fun.  Her songs not only made me want to dance, but sent a message that no matter how hard a woman works for the money, or how lonely and sad she may be, life is good.  When I think of her, I see a dazzling smile, an open and positive force, moving with grace and power, and filling the air with song.

I am so sad that at 63 years of age, she has been silenced by lung cancer. Another reason to hate this terrible disease.

May all beings know love, peace, and Donna Summer's music. 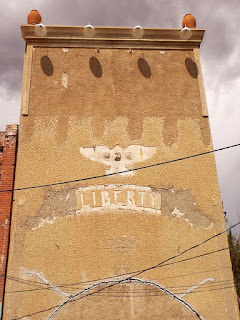 "You know, here's the situation, it's not about books. It's about ethnicity. It's about the power in Phoenix-- what I call the Arpaiocracy."  - Luis Alberto Urrea, writer

"I want you to meet my friends.  When Fritz was in the hospital in Scottsdale and I had to drive down from Sedona to see him, they gave me a key to their house and I was able to stay with them for weeks while he recovered.  They are angels."  My mother-in-law was recounting her ordeal in dealing with her husband's terrible illness during the last few years of his life.  During that time Henry and Alicia were a lifeline.  They asked nothing in return and simply stated that friends help friends - no big deal.  Wonderful people and loyal friends.

I looked forward to having lunch with them and learning more about them.  They both are in their late 70s or early 80s, in pretty good shape, self sufficient, reasonably well-off, white, anglo saxons who migrated to the Arizona desert from the East Coast.  They talked about their travels to Italy, Spain, the Caribbean and other parts of North and South America, impressed with the friendly people and great sights.  Golden days.  They talked about their family, in particular a daughter that is married to a successful Mexican business professional and lives in Mexico City.  They were sad because their son-in-law has two job offerings, one in Atlanta and another in Tucson and he has chosen to live in Atlanta.

"I don't understand why they want to live so far away.  It's terrible to never see the grandkids and now they have the chance to live close to us and they decide to live in Atlanta of all places."  Alicia was visibly upset and Henry changed the subject to local restaurants.  We blathered a while about tennis, weight loss programs, health issues and just when my eyes were crossing from boredom, the subject of the Mexican son-in-law came up again.

"Alicia, why are the kids so selfish about moving?" asked my mother-in-law, never one to tread lightly on a person's emotional minefield.

"I honestly don't know and it is selfish,"  she replied.

"Well, Hector says something about Arizona's politics, erm ...illegal immigrant stuff, Alicia, and he just doesn't want to worry about it," says Henry.

"That's just bullshyte and they both are using Sheriff Joe as an excuse.  There's no problems with Mexicans here."  Alicia was upset again.

As I picked my jaw up off the table and really looked at them, I realized that they truly did not see the racism and persecution in Arizona's handling of Mexicans.  They were supportive of SB1070 and applauded Sheriff Joe's harsh methods of law enforcement, especially toward "illegal" Mexicans.  When I asked why they thought these measures were necessary, they talked about Mexican crime lords who might get tired of slaughtering their own people and head north to slaughter Arizonans.  They believed voting for Arpaio and supporting his harsh law enforcement methods would keep Phoenix safe.  I asked if they were aware of the recent scandals in the Phoenix police department that had made front page news nationwide, and they were rather dismissive of the shake up in the police department.  I mentioned that maybe Sheriff Joe was probably the reason why they did not see their Mexican relatives. They continued to support Arpaio's controversial approach, even when I mentioned that according to several sources  Phoenix has one of the highest crime rates for its size in America.  All this despite Sheriff Joe.  I realized then that neither of them had ever experienced the Phoenix justice system.  They were from the "Greatest Generation" of the forties and were able to be young and make mistakes without harsh anti drug, anti gang, anti immigrant, "stand your ground" laws.

"You may not know this, but I was in a rock band in my teens and twenties," I said, throwing them off balance for a moment.

"Our band played all over Phoenix and it was pretty common to be pulled over by the cops on our way home, late at night.  We looked suspicious because my husband had long hair.  We appeared to be "dope smoking hippies" and if we ran into a hippie-hating, red neck, cop, we would have to step out of the car, suffer being frisked, wait patiently while he poked around, and on several occasions, completely unload all of our equipment from the trunk and explain where we got the equipment from.  Once we had to give the name of the club owner and wait until the cop contacted him to verify that we played at the club." I told them.  It was harassment.  It was persecution.  It was routine.

This was thirty or more years ago, and the Phoenix policing mentality has not gotten any better, but a lot worse.  Mexicans, blacks and hippies have always been on the Phoenix hit list, but now the Arizona legislature has codified and legalized that persecution.  Now vigilante, white supremacists patrol the borders and promote their anti government, racist defiance, while influencing politics in the Grand Canyon State.

I am opposed to anyone illegally entering the U.S.  Current rules for legal entry are pretty stringent but not unreasonable and the Obama administration has not been shy about enforcing these laws despite criticism on all sides of the political spectrum.  Enforcement is what makes laws work, not additional laws.   Immigration policies in the US  have been encouraged or discouraged depending on economic needs which fluctuate and change and these changes have created a confusing and inconsistent maze of requirements and restrictions without a clear goal for enhancing American life.  We need a flexible immigration system based on fairness, resolve, and America's economic needs - a tall order and one that is getting more critical each year.

For Mexican migrant workers, systems for legal entry into the US have been difficult and inconsistent.  The one consistent reality has been that growers need farm workers willing to work hard, long and cheaply, and, until recently, the growers and other employers have been successful in influencing governments to be lax about enforcing immigration and deportation laws.  When the economy tanked, enforcement and reform became the favorite buzz words for politicians.  For the growers and the laborers, it's all about the work... the paycheck.  The reason why Mexicans come to America is for the work.  I've argued with those that believe that Mexicans come here for the health care, or welfare, or to go to school, or because Americans are wonderful.  Just not true.

It is unfortunate for us that Arizona, in particular, and other "immigration obsessed" Americans focus their fear and loathing on Mexico, our closest neighbor.  Instead of fearing our neighbor, we should take note that she is the second largest buyer of US products in the world.  She is developing a savvy and strong middle class, despite worldwide economic turmoil.  She brings rich cultural treasures to our country in the form of music, food, art, literature, craftsmanship and is aligned with proclaimed US "family values" and patriotism.

"I didn't realize that police in Arizona persecute people.  I've just never experienced it." said Alicia.  She and Henry may be sceptical about my claims and my insights into why her family does not want to deal with harassment and discrimination, but her mind is open a little bit wider because she's met someone with a different experience.  I've found that most of my opinions and preferences, while informed by fact, are made by experiences.

If Henry and Alicia want closer ties with their Mexican relatives, they need to look at Arizona from the perspective of a visitor and outsider.  Are visitors and outsiders welcome?  Is there a good balance of benefits for business and benefits for workers?  Do the proposals and actions of elected officials reflect well on Arizona or do they reflect the partisan ideology of special interests.  Recent U.S. Census figures indicate fewer people are moving to Arizona and that 38% of Arizonans are native born (up 3% from 2010).  An aging, static population is problematic for innovation, growth and necessary labor intensive industries.  Finding ways to encourage visitors and new citizens begins and ends with tolerance.  Right or wrong, Arizona continues to send a message of intolerance.  Arizonans really need to look down the road a few years and realize that a more moderate approach to economic and social issues is what Arizona needs to grow and thrive.
Posted by Kathy at 5/10/2012 08:15:00 PM