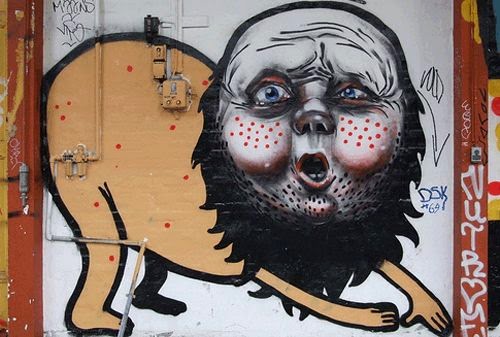 
I was escorted by Nurse into the whitest room I'd ever seen. The walls were white. The floor was white. Every piece of furniture, every machine, every plug, every cord and instrument was white. Nurse was dressed entirely in white, including the latex gloves needed for the examination before the procedure. I was the only color in the room. Even that faint blush was eliminated after stripping naked and shrugging into the thin, paper surgical gown.

“Lie face down on the examination table with your gown open in the front, please.” Nurse was very polite and as sterile as the room.

It was terrifying. I felt an animal fear of consequences. I felt a blood-red, dirty, clawing feeling with that now familiar claustrophobia endemic to modern American life. Nothing was private. No one was hidden. Every animalistic, error-prone, human action was exposed and trapped in the whiteness of security. I must be examined and made safe and productive for America. This is the overriding narrative in every news media event, every informed opinion, every conversation in every household.  I felt panic.

“Mr. Lemning, your chart shows that you received treatment here five years ago for a venereal disease. Why did you take so long to come in for this examination? It's been two years since Louisiana law was passed requiring all state residents to undergo today's procedure. The deadline has passed and if we are unable to administer the procedure on you today, you may have violated this law. It will then be our duty as medical providers to inform the state police and you might be jailed without trial. I say this now so that if you have been examined somewhere else since the VD laws were passed you can tell me and I'll verify that the procedure has been done already. You will then be free to go.” Nurse waited the appropriate thirty seconds for my response.

Hearing nothing from me, I was told to position myself on the table so that my penis hung down through a hole on the table. Beneath the opening was equipment that fit inside the hole and quickly scanned my shriveled flesh right up to my belly. While the scan was taking place, I felt a heavy, cold instrument penetrate my ass. Nurse explained that the law required that men have their anus and penis scanned for impotence, disease or unusual inflammation. Both scans took slightly longer than Nurse's explanation and were surprisingly humiliating. I felt violated. The last secret place was probed, scanned, penetrated. My final secrets were now recorded on my medical records, all of which were made public when the new VD laws were passed.

“Please remain as you are on the table until Doctor comes. It shouldn't be more than a few minutes before we have the scan results and can verify them with the state database.” I saw the Nurse push buttons, remove and reposition the scanners, strip off scan membranes and the latex gloves all of which were thrown into a white trash bin. Then I felt the slight weight of a sheet or paper across my buttocks.

“What is going to happen,” I wondered out loud.

Three years ago, the nation was rocked by a series of scandals involving people who had sterilization procedures so they could not have children. Over a hundred men and thirty-six women were arrested in Louisiana for choosing to be sterilized and violating anti-abortion laws. Within a year, my state became one of five states able to arrest and jail “non producers.” The governor had proposed that laws should be passed to protect the unborn citizens of America by making sure men and women were able to reproduce. The state legislature approved the bill and set up the Division of Reproductive Health with clinics all over the state. A blue state liberal blogger spread the lie that Louisiana has more DRH clinics for the unborn than it has clinics for living children. Even though liberals are deluded liars, I will look this up. Probably shouldn't use the censored state internet.  I think the Starbucks wifi network may still be uncensored but it's not free anymore.

“Where's the damned Doctor?” I'm cold, uncomfortable on this table and becoming claustrophobic from all of this whiteness.

I close my eyes and allow the redness within my eyelids to warm me. I block out the whiteness and cold and even think about dozing, but there's that scratchy feeling at the back of my brain that keeps me alert. I'm in danger. There is no doubt that delaying this exam was a mistake. There is no doubt that I should have moved out of state with my girlfriend two years ago when the laws went into effect.

She had her tubes tied after having her third kid. Her boy child.  She was married at the time. Married to a lawyer who worked for ShoppersChoice in Baton Rouge. The whole thing lasted only five years. She said all he wanted was a baby machine so when she tied her tubes, she didn't tell him and that was the end of the marriage. A couple more years of nasty legal battles over child custody, good parent/bad parent, property division and she winds up with her two daughters and he takes the boy child.

I met him once. The whole family was at his father's funeral which was very, very Southern Baptist. She and her daughters were treated like cancer, in my opinion. I didn't expect any kind of treatment and wasn't disappointed.  Her little boy barely knew her which broke her heart and made her daughters cry. Shortly after that horror show, Louisiana passed the centerpiece of its anti-abortion program, the Reproductive Health Guarantee bill. Within weeks, she fled the state with her daughters violating the divorce agreement and the RHG laws.

I didn't go with her and now I have no idea where she is but the DRH doesn't believe me. Her husband filed for custody of her daughters last year because she is a law breaker but she cannot be found. So lawyers, police, you name it, have tapped my phone, followed me, sent letters, harassed me for information about her. She was just my girlfriend. We broke up. I don't know where she is. Now, the state is trying to pass “truth serum” interrogation laws.  No doubt Louisiana will be the first in the nation to try it out and I know my name is at the top of their list.

“Sir? Please get dressed and come with me,” says a stocky man in a white coat.

“One of them, yes. Please get dressed and we'll discuss your treatment options in my office, please.” He's out the door before I can ask why or where. I'm just relieved that I can get off this table and get dressed. I feel the scratch again as I lever myself off the table and find my clothes. Soon I'm dressed and something tells me to check the hall before I barge out. There is a security guard looking bored at the end of the hall. He's listening to Nurse and glances toward my door. I step into the hall and head toward the waiting room.

“Sir! Sir? Please. Come this way. The Doctor is waiting. This is his office, sir.” The security officer is smiling, his hands are in the air not near his holster. He waves me toward him. I remember that there is an exit to the alley before the waiting room and I sprint toward that door. It has an alarm, but I don't hear it as I run to my car. I tell myself that if the Doctor really was just going to discuss treatment options, no one should follow. My eyes tell me the security guard is in the alley and I will get to my unlocked car in time to drive away.

This is the last straw. My job, my home, my family, my friends none of these things are more important to me than living free. I can't live in a place that owns my sperm. This thought jars me out of my panic and I realize that any entity that takes away your ability to choose whether you reproduce or not owns you body and soul. Someday I'll figure out why conservatives promote these laws. Today, I'm heading for California.
Posted by Kathy at 4/09/2014 12:51:00 PM